News and articles from IILT Dublin.

Our Afternoon on Top Of The World

We were very enthusiastic to go up the building. So Ten by Ten we went with Sean to the top of the building. We saw a lot of famous buildings, like Trinity College, Croke Park, Custom House and the Liffey River. As you see in the above picture, there is Custom House on the north side of Dublin. All of the classmates were taking the pictures of their favourite side, so everybody was so busy. I think everybody was very ecstatic at that day.

Last Friday was a very nice and exiting day. My classmates and I visited Liberty hall, which is the tallest building in Dublin. We were delighted because it the first time I was there. There were a lot of things to see in the building and around. We spent about 2 hours there and we all seemed to have a nice time. We went up by lift to conference room and the top of building. When I was on the top of building I was thrilled because I am afraid of heights.

The photograph shows the biggest river in Dublin, which divides the city in two parts. It is called the Liffey River. In the middle of the photograph you see O’Connell Street. It shows how big, busy and beautiful the city is. The photograph was taken a lovely sunny day on the top of Liberty Hall. There are some landmarks such as O’Connell Bridge. The river gives a warm feeling to the city.

I was excited to go up to the top of Library Hall and see Dublin from above. We went up with the lift and waited in the conference room to go up to the top of liberty Hall. When I went up of the roof, I was enthusiastic and I saw different buildings and the River Liffey, sea and buses. We took many photos. In my photo you can see on bus passing in the street and some cars as well .On the left, there is a big office building
On the right, there is a train track. In the background, there is the Irish life building. It was taken on a lovely sunny day from the top of the building. Liberty Hall is one of the most famous and historic landmarks. Today Liberty Hall is more modern than before. It looks towards the north Dublin .The proclamation of Independence was printed there on Easter Sunday1916.

That building is the highest and one of the landmarks in Dublin. We went inside and met Sean- person who showed us the building. Then we went up by lift to the conference room witch is on level 11. We took pictures from that room. Then we separated into two groups and went up by lift to the level 15. There we saw beautiful view – Dublin from above. The Weather was very good and we took many great photos around the building. Before we went down we grouped and took some pictures with different cameras.

Liberty Hall is currently tallest, most historical and modern building in Dublin. On Friday June 1st I visited Liberty Hall with my classmates and teacher. First of all we assembled in front of the building and went up by lift to the conference room with Sean who was leading us. We stayed there about 30 minutes and we saw one side of the Dublin.
After that we went up the 15th floor, which was the last of the building. We were excited to look around and saw how big Dublin is.
We could see different buildings, the River Liffey, and the Dublin Mountains and the Spike of Dublin. Finally, we grouped together and took this picture to remember this day.
In general my visit was most interesting. All the students and teachers were lovely and the weather was nice. 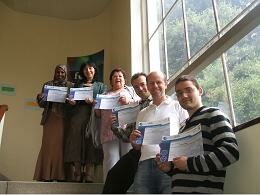 Students from Marianna's Pre-vocational class photographed by Peter with their Equalskills certificates. Equalskills is an IT qualification from ECDL.

Congratulations to all IILT students who have completed courses this September and who have been assessed in FETAC Language 3, 4, or 5, FETAC Computer Literacy, FETAC Preparation for Work, or Equalskills.

Our Safari in Dublin

On Friday all the class were in Stephens Green Park.

They saw the nice picture gallery about the “ Spirit of The Wild “.   All the class had a nice time, and everyone
enjoyed it. All the students and teachers took some photos.
For example the picture with penguins. Below this picture
one student and two teachers took a picture. I see this
nice picture now, and I understand, they had a very nice time. 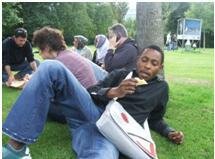 On Friday afternoon we went to Stephens Green park and then we sat on the ground, the weather was nice we had some food and sandwich, and there was a girl gave Serge a sandwich, Ciara was sitting behind Serge and she was eating, after that we went to home.
Seja 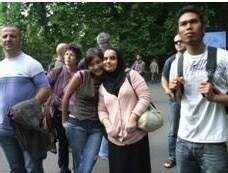 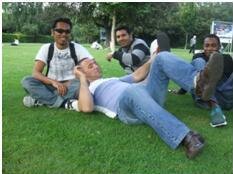 On Friday 7th September 2007, we visited Stephens Green Park. The weather was sunny, and we had a lovely day. We saw lots of Animals photographs. They were elephant, lion, bear, tiger, orang-utan, hippopotamus, penguin, koala, monkey, panda, and more of them. My favourite photograph was the Japanese monkeys family. They looked so cute with white colours and red faces. I would like to come again if they have photography exhibition like this next time.
Made Indiarta 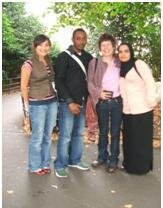 Moba took this picture, when we were walking in Stephen’s Green park on Friday 07 September 2007 with Camilla ( left), Serge and Ciara (middle) and Farras Hassan (right).

It was a nice day, we enjoying so much our Safari and we saw also a lot of people there and the entire community of Ireland.

After walking, we had a few minutes for break and took some pictures, we sat on the ground to have a bit eat and drink together.

Some minutes later, everybody went back and we were scattered in many ways and it was the end of our safari in Stephen’s Green Park, etc. 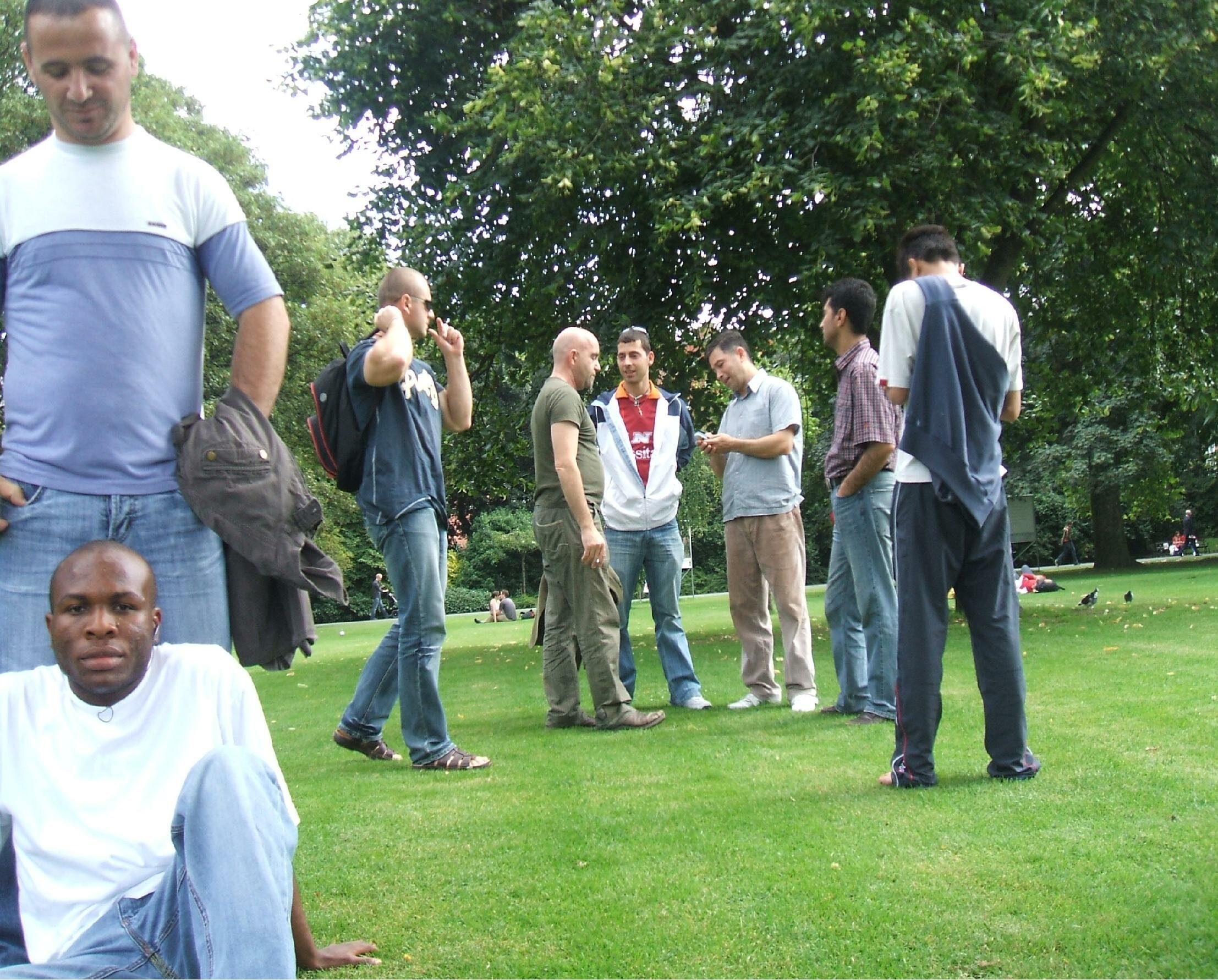 In this picture it is me Moba in front, behind me it is Renato
Beside us it is a group of students from another class.
In this picture I saw the camera, it was nice and it was among my
experiences.

At Christmas I sometimes go to visit my family with my husband and my baby. At Christmas I like to cook fish, chicken, beef and potato. Maybe when I finish I will call my friends to come and eat in my house.

This Christmas I think my family will be very happy.

Last Christmas I met with my family in my country.

When I was a child at Christmas my mammy bought some presents for me and cooked chicken, fish, potato and cake for me.

Christmas in Ireland is different than in my country. In my country at Christmas you see many many people go to church and pray to God.

Sometimes at Christmas I go to church with my family, buy jeans and T-shirts.

I think my family is happy.

Last Christmas my husband was sick, it wasn’t great.

When I was a child Christmas was a very happy time. It was different to Christmas in Ireland, but it is good here. I drink tea.

I have not seen Christmas until now, but I will spend Christmas in Dublin. I have prepared myself for this Christmas and I would like to be at the Christmas party.

In my opinion Christmas is a big peace celebration for people and all the people become closer together and more friendly. Indeed, Irish people give much importance to Christmas, because Christmas in itself for past years and now has helped people to peace.

It is my first time seeing Christmas. I didn’t see last Christmas, but this Christmas I will have a big party. When I am walking in the street and looking at coloured lights and colourful flowers my heart becomes fresh and happy and I forget my sad past, when I was living in a dust desert in the tents.

In my opinion every nation has to like Christmas, and also has to like every other nation and everybody.

My Name is Woman 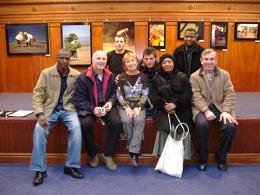 
How is this connected to International Women’s day?

It’s connected to women, full stop. It is just part of the commemoration here.

Have you done other exhibitions?

Yes, there is an exhibition of mine on colour and movement running in Austria at the moment and I have also made a book on Trapani in Italy.

What about the photos of elderly women?

Western women are not allowed to grow old – western men don’t consider them, they want their women to be young. These women have a history and geography in their face, you can read life in their faces, not wrinkles.


Where did you get your surname?

From my father, yes I know what you’re saying, it means freedom in some slavic languages. I think it comes from the time of the break-up of the Austrian Empire, those who fought for freedom would have taken this as a surname.


Why is your self-portait just your shadow?

Well the shadow is caused by the sun and women need sun, light and water, yes this was a beautiful place.

What language of photography are you using?

These photos express my relationship with these women. I wanted to show them in the right way, so that they are properly considered as women, with dignity.

Women need freedom but in some pictures they don’t look free in their way of dressing.

The women in some pictures are dressed this way to protect them from their environments, extremes of sand and sun would need special clothes. It’s also part of tradition and was there long before politics, born of various necessities.

What do you think of African Women?

I have met more African women outside Africa. Women are the same worldwide, these photos are not really about cultural diversity but about universal themes concerning women.

What about the photo of prostitution?

This lady is not young, it’s the oldest and, I think, the hardest job in the world. She works with dignity, there is a lot of dignity in this photo.

I see you have covered topics such as motherhood, work, etc. Why have you not included education?

Most of the women I met did not have the opportunity to go to school, many were illiterate, so it didn’t come up in the photos.

What do you think is the future for women?

I am not a fortune teller, so I don’t really know.

Where did you get the idea for this exhibition?

I found that I had lots of women photos and decided to make a story from them. It is a story of one woman’s life told by many women, one life despite the different cultures.